We head towards Arrieta, a small village in the northeast of the island known for the Aloe Vera museum (read shop) and La Casa Roja (red, unlike all the rest that are white). Tony explains that Aloe Vera is a traditional product of the island, made from the plant which has been left dry for a long time and turns light purple but is still alive. 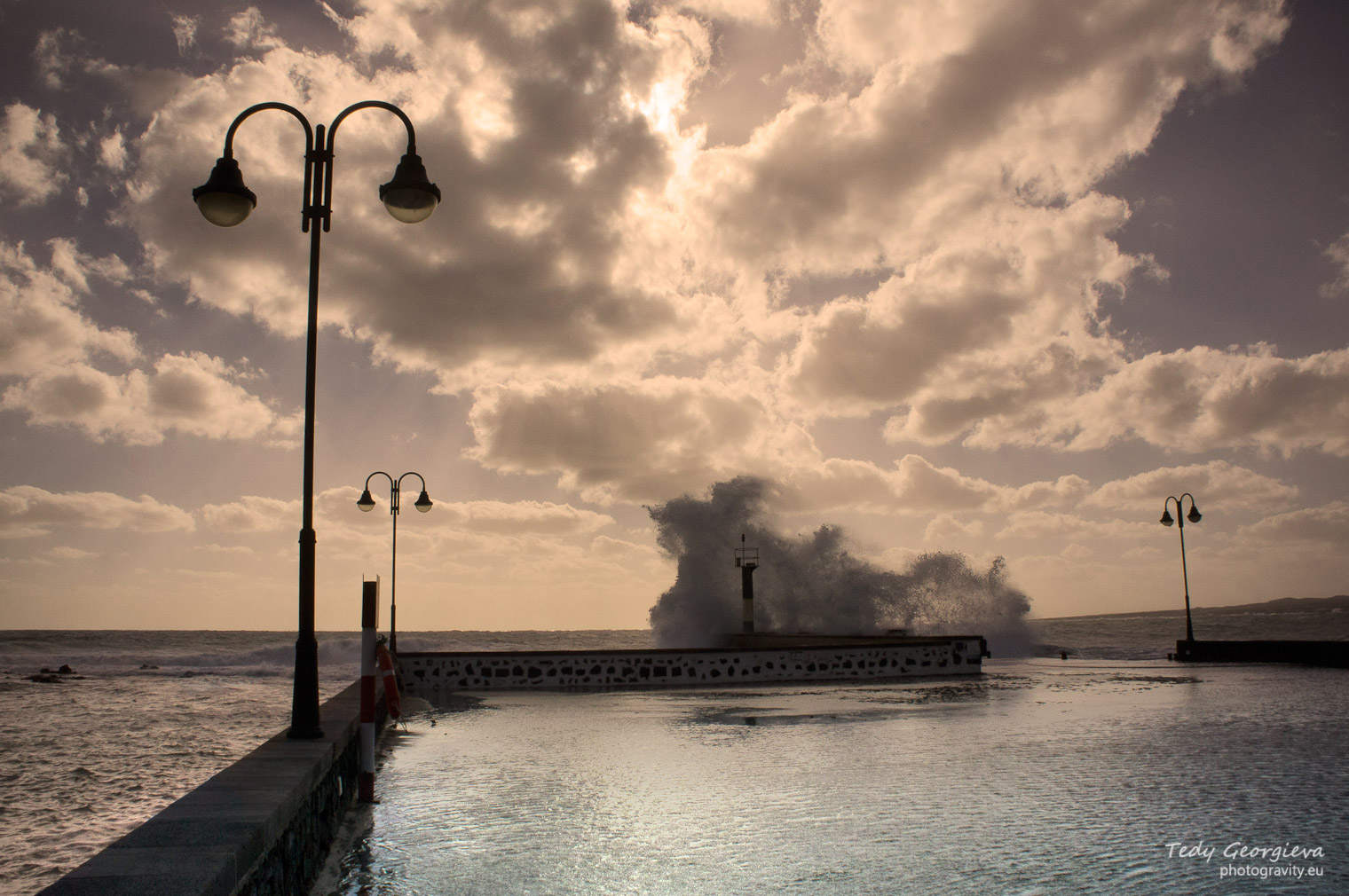 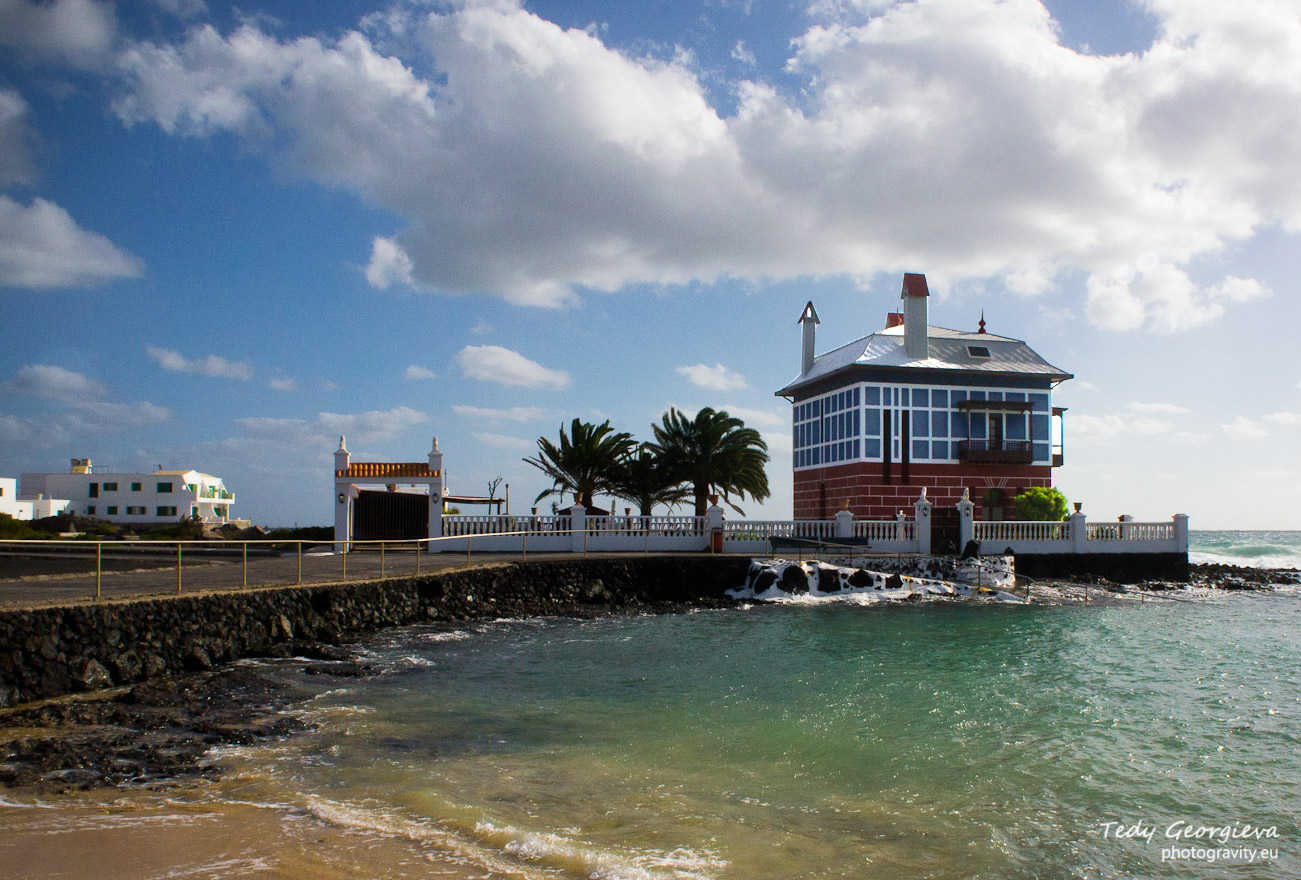 A wealthy man ordered the house to be built on the shore to help his daughter who suffered from tuberculosis feel better. The architect used one of the girl’s dollhouses as a model – an unusual undertaking for the times about a century ago. Today the house and the adjacent garden are very well kept although there is no sign of the owners, just the staff. The grass is green, ryegrass, an unusual solution that requires regular watering, which is a costly undertaking by island standards. The house itself is repainted red every year.

The village lighthouse is just in front of the house. They are divided by a miniature dike allowing the formation of a sort of natural pool with a little beach tempting sun lovers. December, though, is not the most appropriate moment for sunbathing. 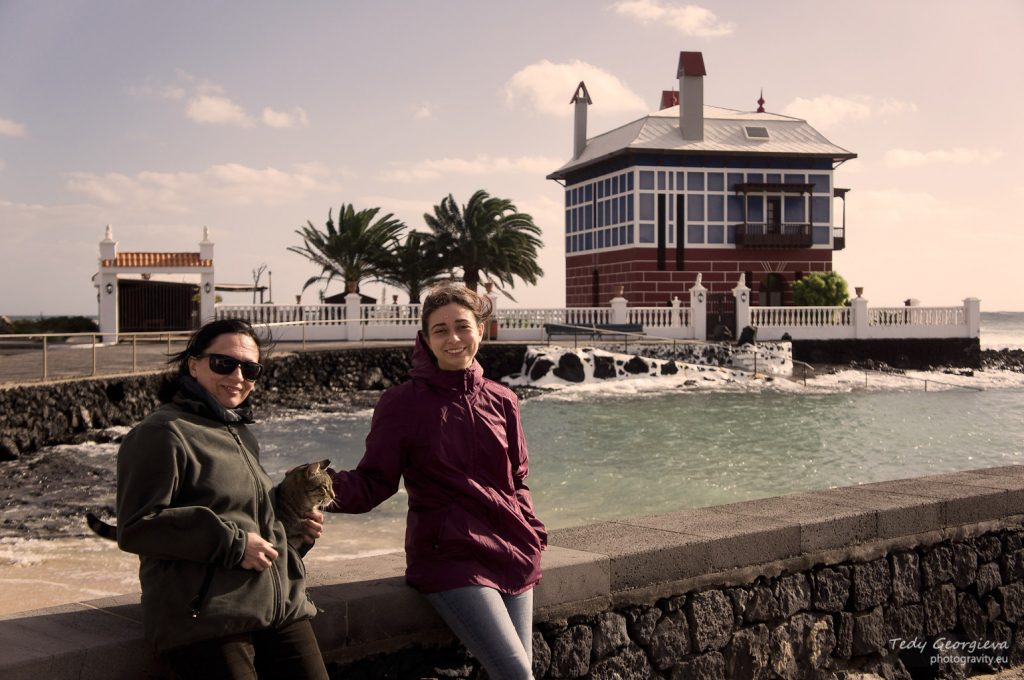 In fact, it is best to visit the Canary Islands in September and October. It is too hot in the summer and too windy for the rest of the time. Wind is practically ever-present the year out, quite strong to storm force when we were there. After all, this is just a spec of land thrown out somewhere in the Atlantic Ocean.

Tony tells us properties on the island are quite costly – a townhouse with about 20 square meters of garden costs some 200,000 euro (!) and the rent for a flat in the capital Arrecife, for example, is about 800 euro (to be bought at 120,000 euro). The larger the garden and the closer a property is to the beaches, the higher the price.

Now we head for the northern coast, towards one of the most famous platforms on the island, Mirador del Rio, offering an incredible view of the nearby island of Graciosa. 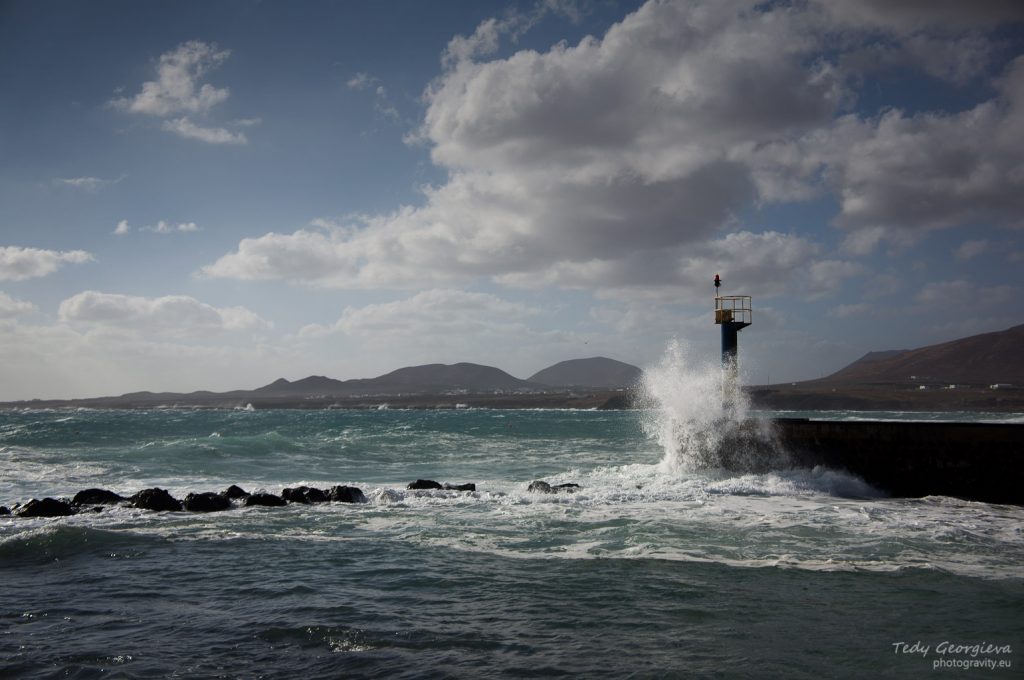 Next stop – the old capital Teguise. The road is steep. It turns out the highest point on the island is not more than 670 m. In spite of that, the road resembles the turns of a serpentine. We stop at a roadside restaurant with a parking and a panoramic view of the so-called Valley of a Thousand Palms. The place is really remarkable: a terrific view opens in front but to watch it you have to cling to one of the protecting poles. As Tony says, even tripods fly in the gusts of the wind.

We enter Los Volcanes Natural Park where the entrance is free (unlike that to Timanfaya National Park). A path leads to the crater of one of the volcanoes where you can take a glimpse into its 400-m maw.

We are surrounded by lava – black, frozen in different forms as it has flowed down the slope or the rocks flew from the hot crater. A lunar landscape. The lava flowing down the slope formed bubbles some of which quite large. Dozens of years later, when the roof of such a bubble caves in with the weather, a cave is formed. In the case of smaller bubbles, they form hollows where the locals plant trees, place benches and tables and turn them into rest spots protected from the wind. 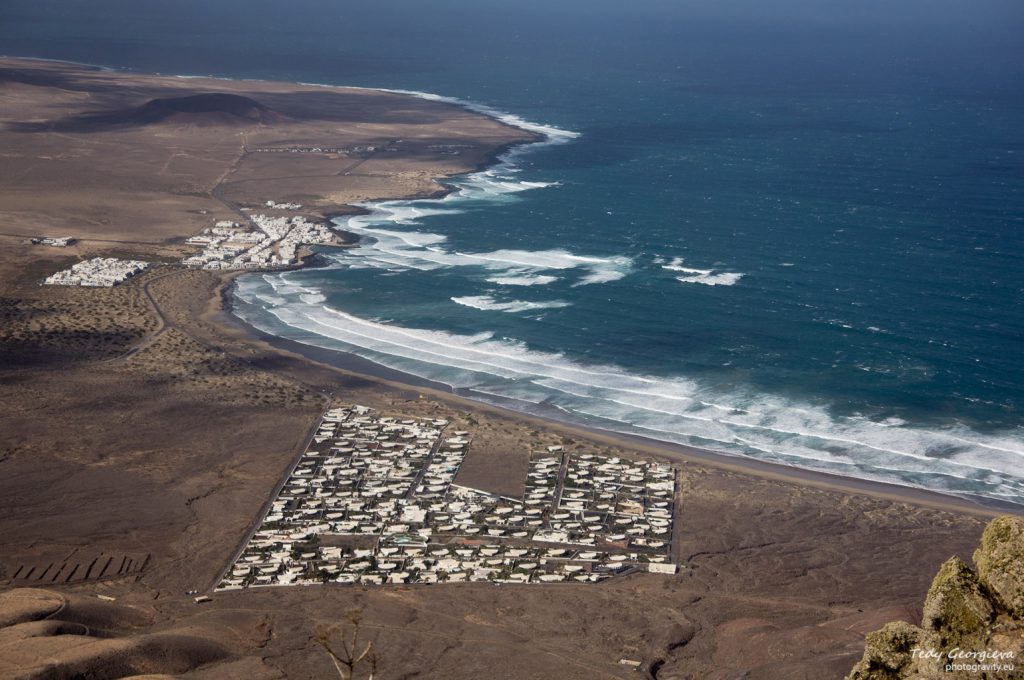 The island is almost entirely flat, with just the tips of the craters rising. It turns out that each island in the archipelago has its own specific features and that, although they are so close, they actually differ a lot. For example, Tenerife is the best-known tourist destination where one can see all four seasons at the same time. Tenerife is also home to Spain’s highest peak at an altitude of 3,718 m. The wind, though, is everywhere.

At the foot of the volcanoes we managed to find olivine (a natural mineral) also known as peridot (its prevalent name as a gemstone in English and German-speaking countries) or as chrysolite in Eastern Europe. This is a semi-precious stone from which locals make beautiful jewelry. The olivine here was formed at the crystallization of the magma rocks. Of course, the volcanic stone is most abundant and can also be bought in Bulgaria but in Canaria it is in its natural environment.

Next stop Lа Geria, Lanzarote’s main vine-growing region which has been declared a protected landscape, yet another one of its peculiarities. It is a well-known wine destination and a must on tourist itineraries. The vineyards are actually a series of holes in the ground 1-2 m deep by 4-5 m wide in each of which the locals plant a Malvasia vine in order to protect it from the wind. The vines are grown on the ground, not raised on stakes. In a more recent variant, the holes are surrounded on three sides by half-moons of volcanic rock. Mechanisation is impossible and everything is done only by hand. Harvesting is obviously a difficult occupation. Such fields can also be seen along the volcano slopes and where the craters are shallower – inside too. A truly lunar landscape. 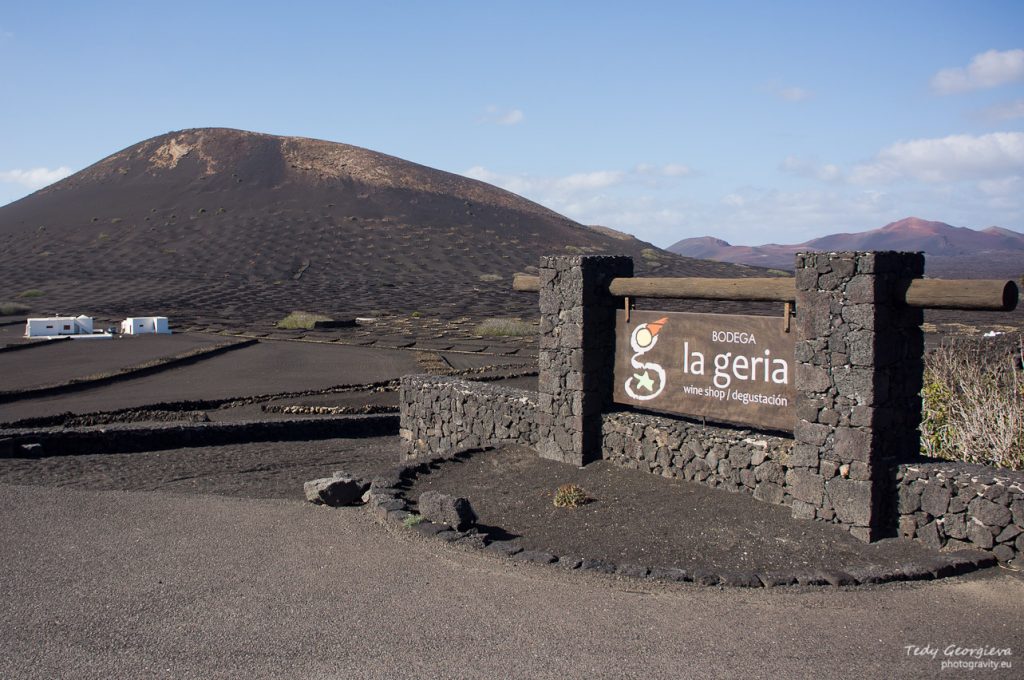 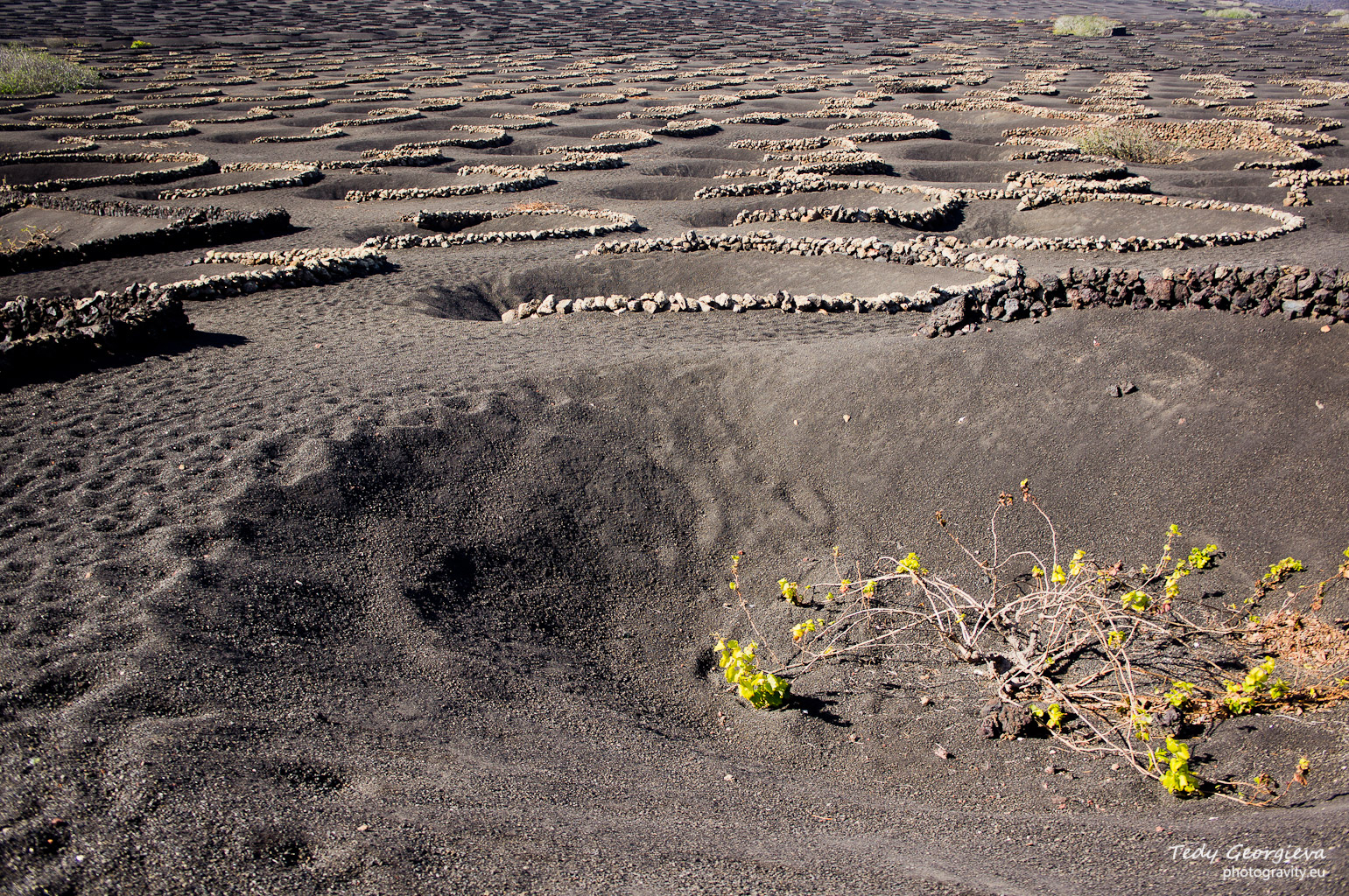 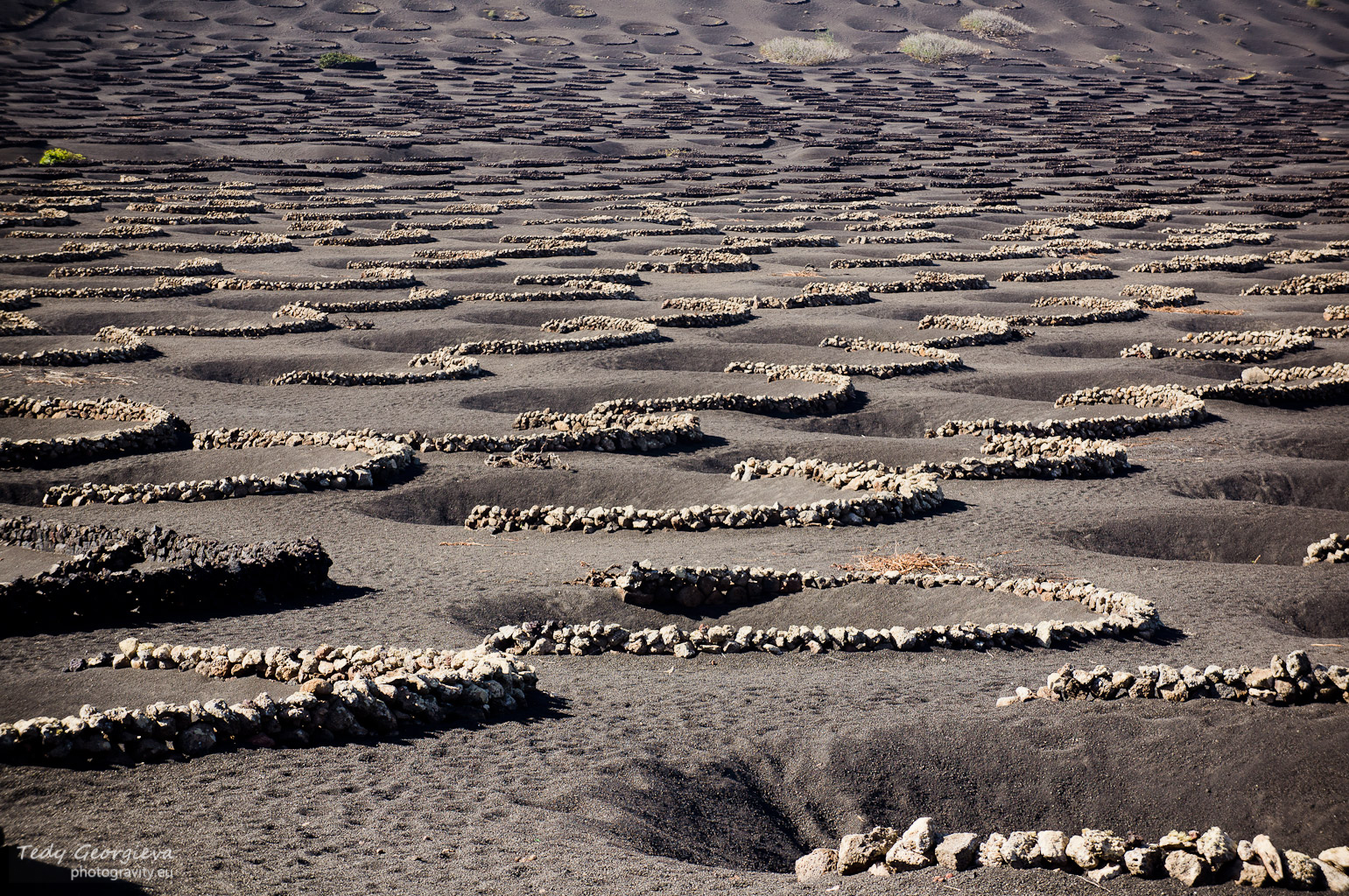 Grape harvesting is completed by end-October which did not allow us to really enjoy the contrast between the green-gold of the vines and the black of the earth. When we traveled across the island later we could see some more modern-looking vineyards of long rows divided by walls of volcanic rock. Some were even trained on a trellis which probably made them more exposed to the wind. 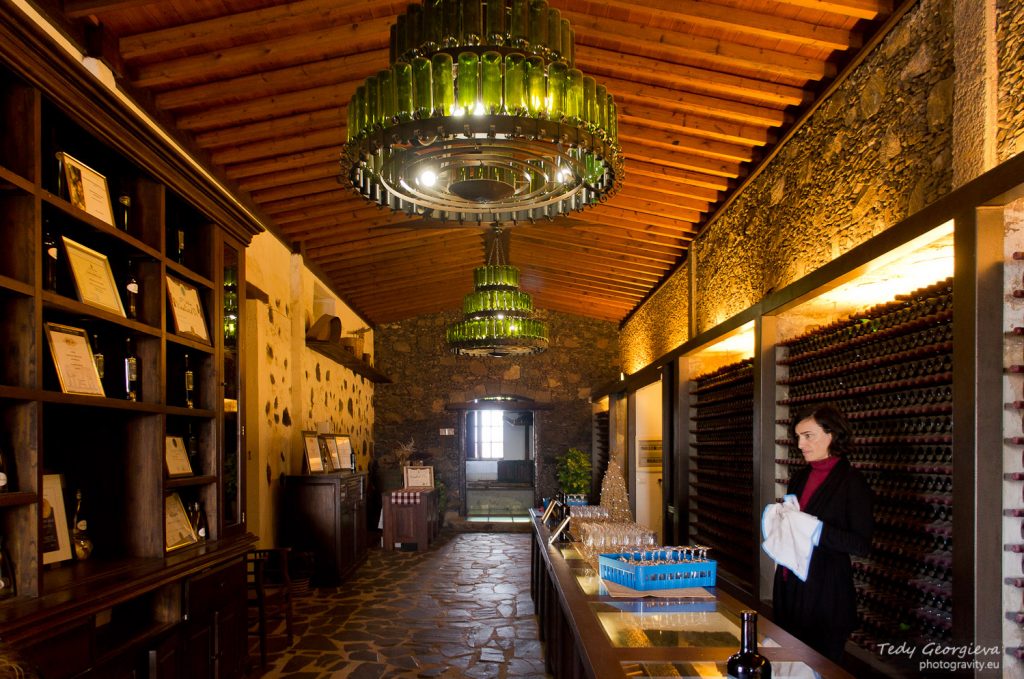 The winery we visited is located in an old house where visits are free. Tasting is offered at 1.0 euro per taste. White wine is traditional. The hosts offer three variants of several sweet wines, semi-dry and dry. Red wine is produced in a new, experimental way. The technology was borrowed from Tenerife but some improvements have also been made. They told us that the same day they had been visited by a TV crew who had made a spot about the novelty. 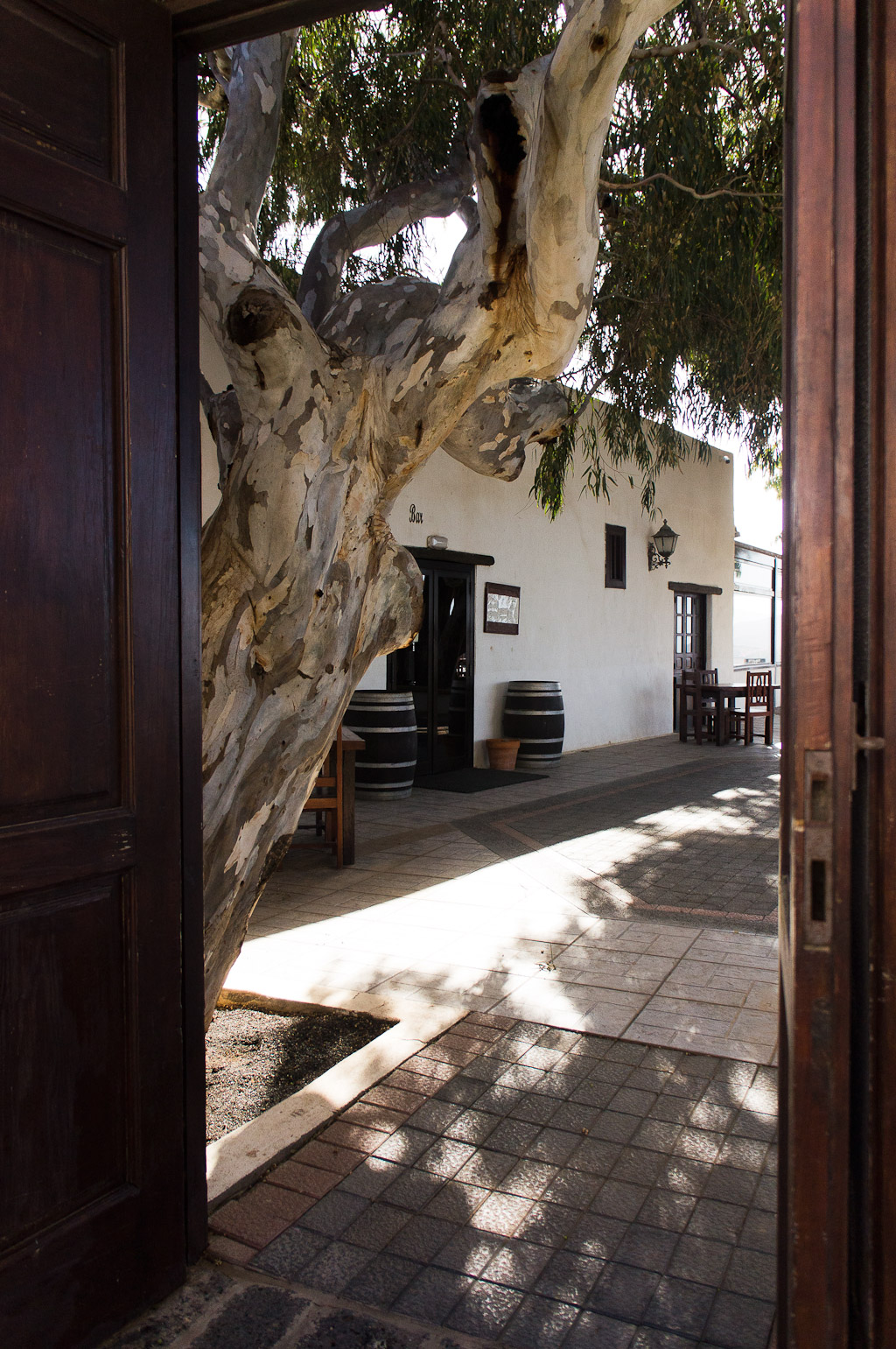 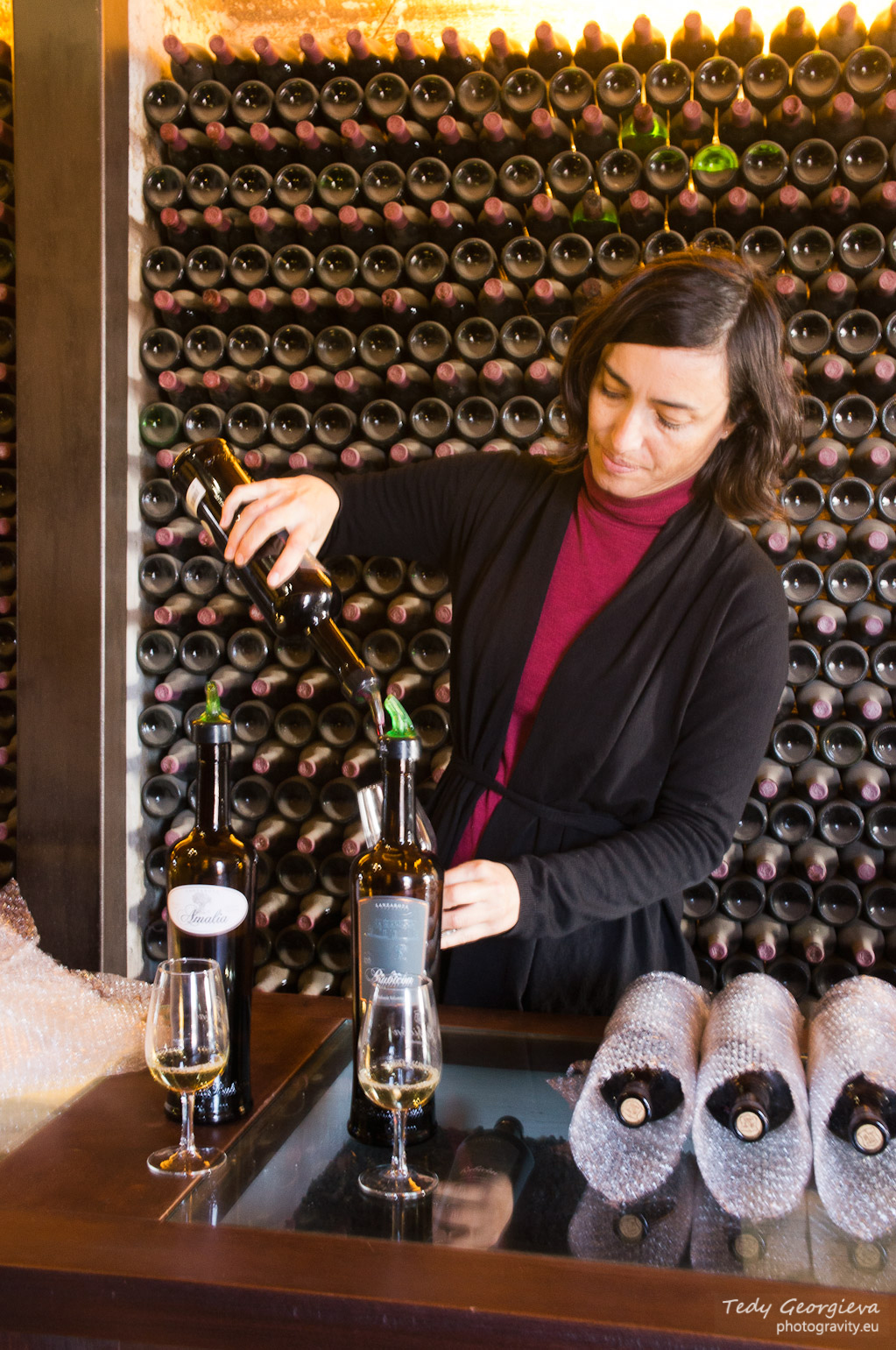 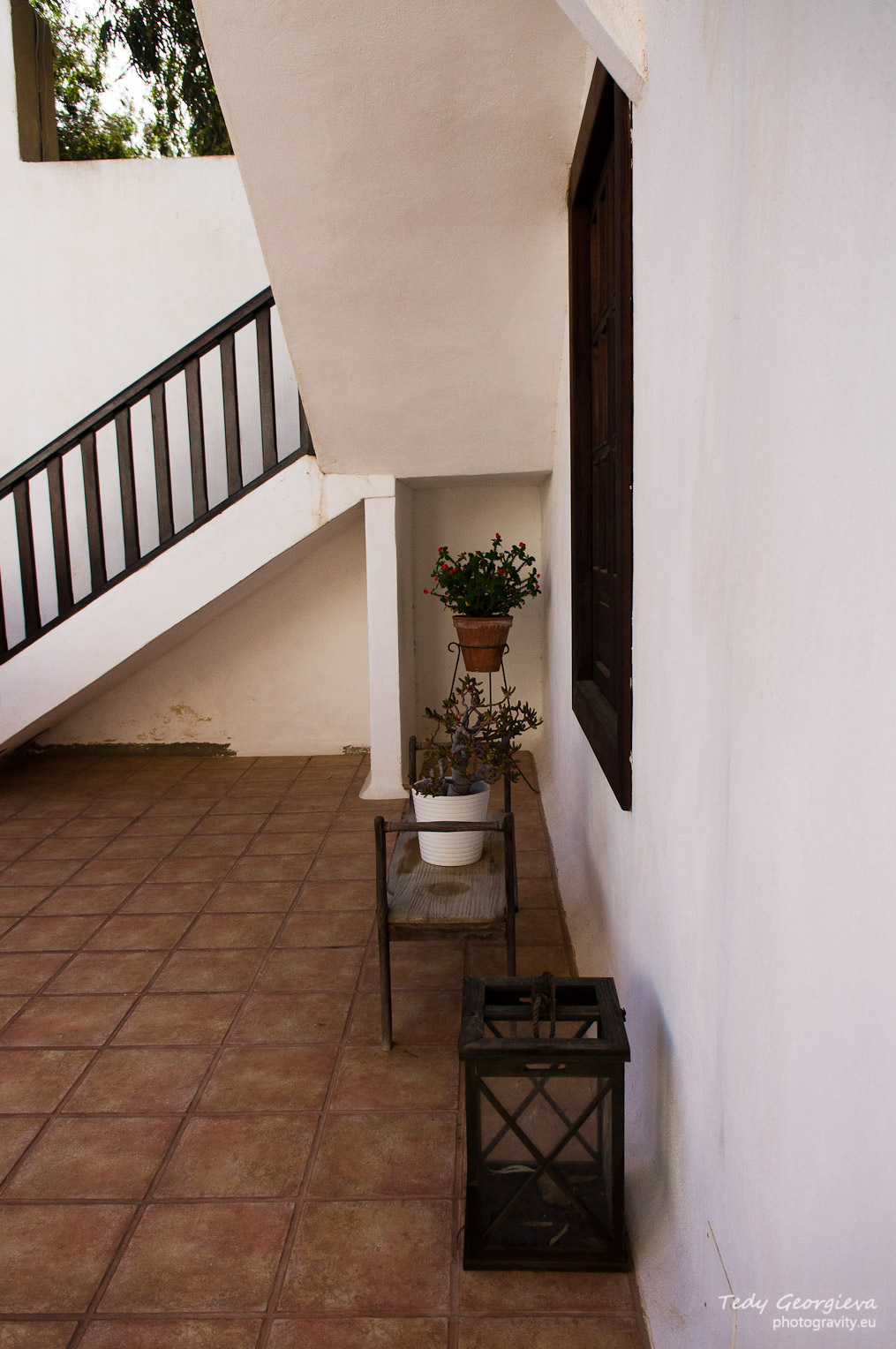 We buy several bottles of wine and give one of them to Tony (her favourite) to drink to our health on December 16, Saturday, 2017. 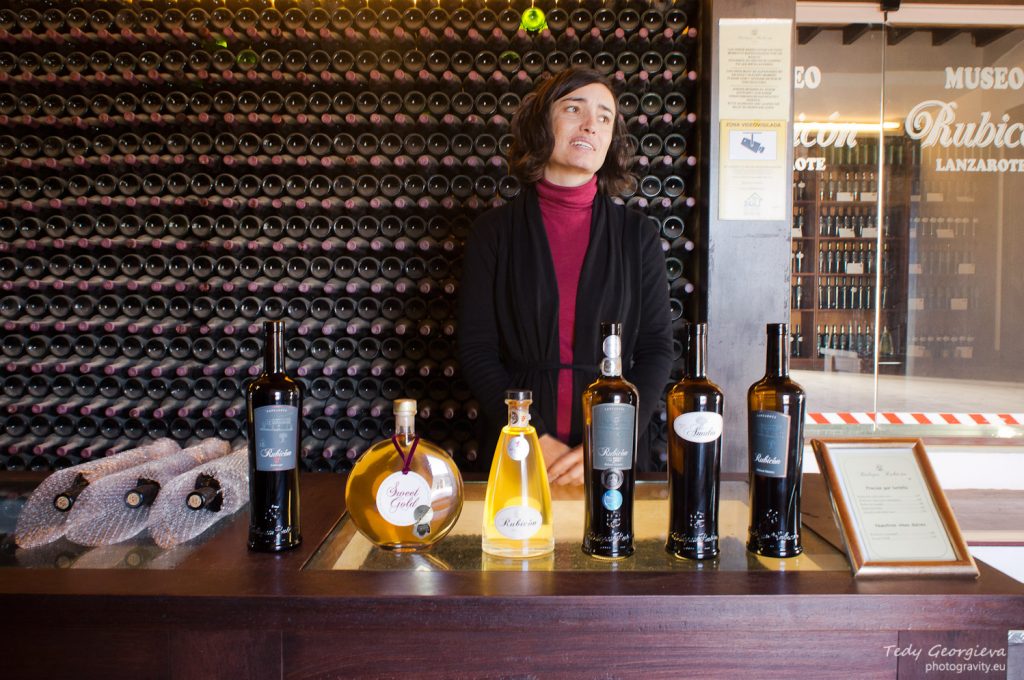 Next stop – the Green Lake/Lago Verde formed in the crater of a volcano and named after its bright sugary green colour formed by the volcanic sulphur and the algae that inhabit it. It is right next to the small village of El Golfo.

The view is surprising and unexpectedly impressive! 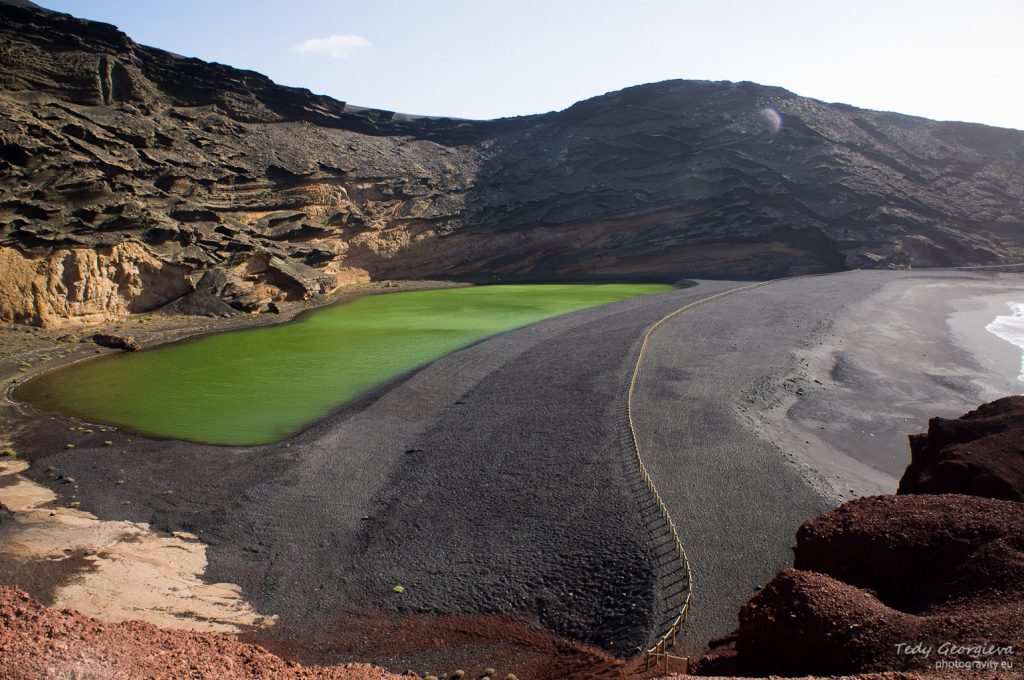 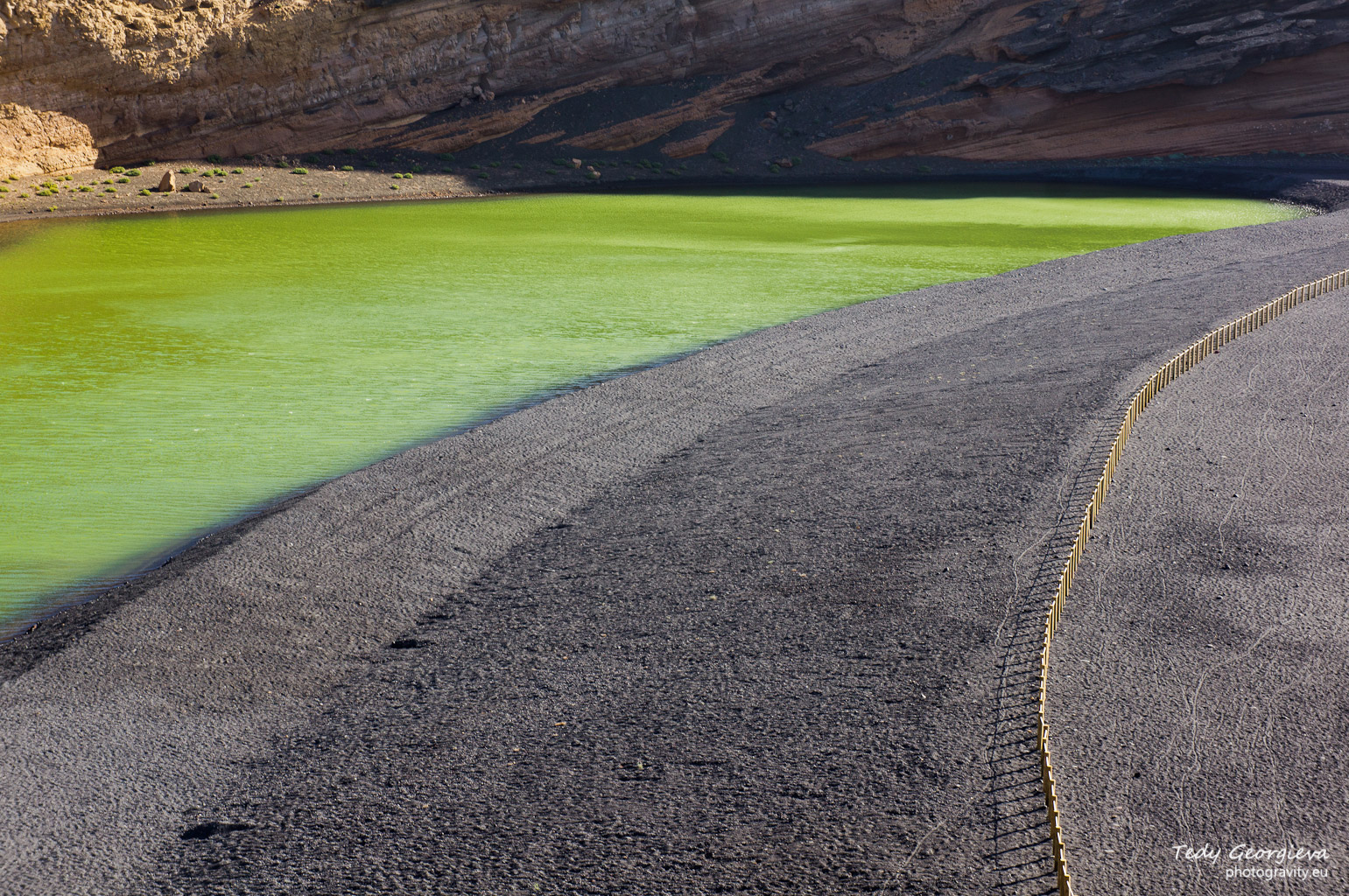 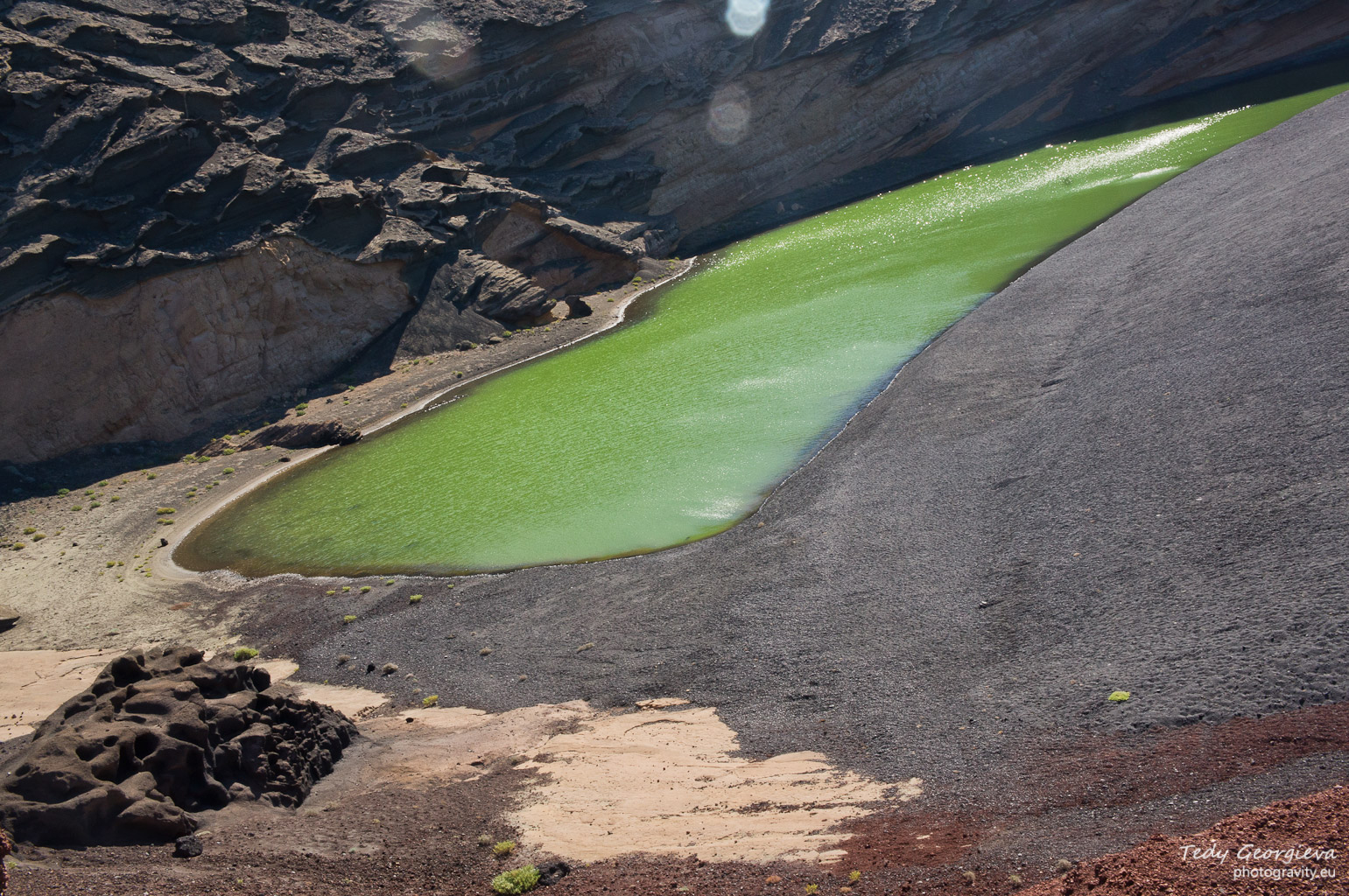 This was also our last adventure for the day. Tony left us in front of the hotel. We wished her to make the trip to the Scandinavian countries she covets soon. 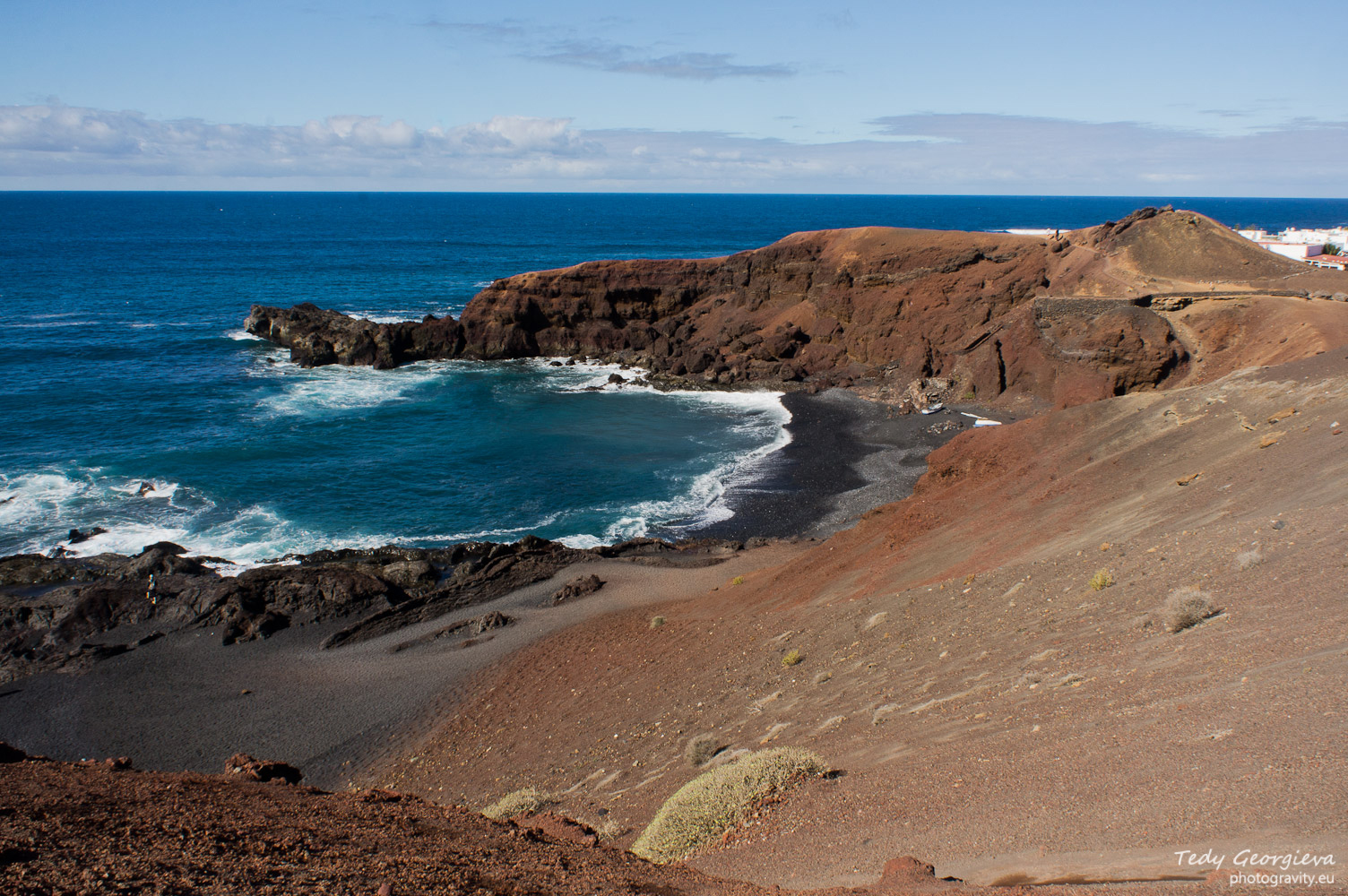 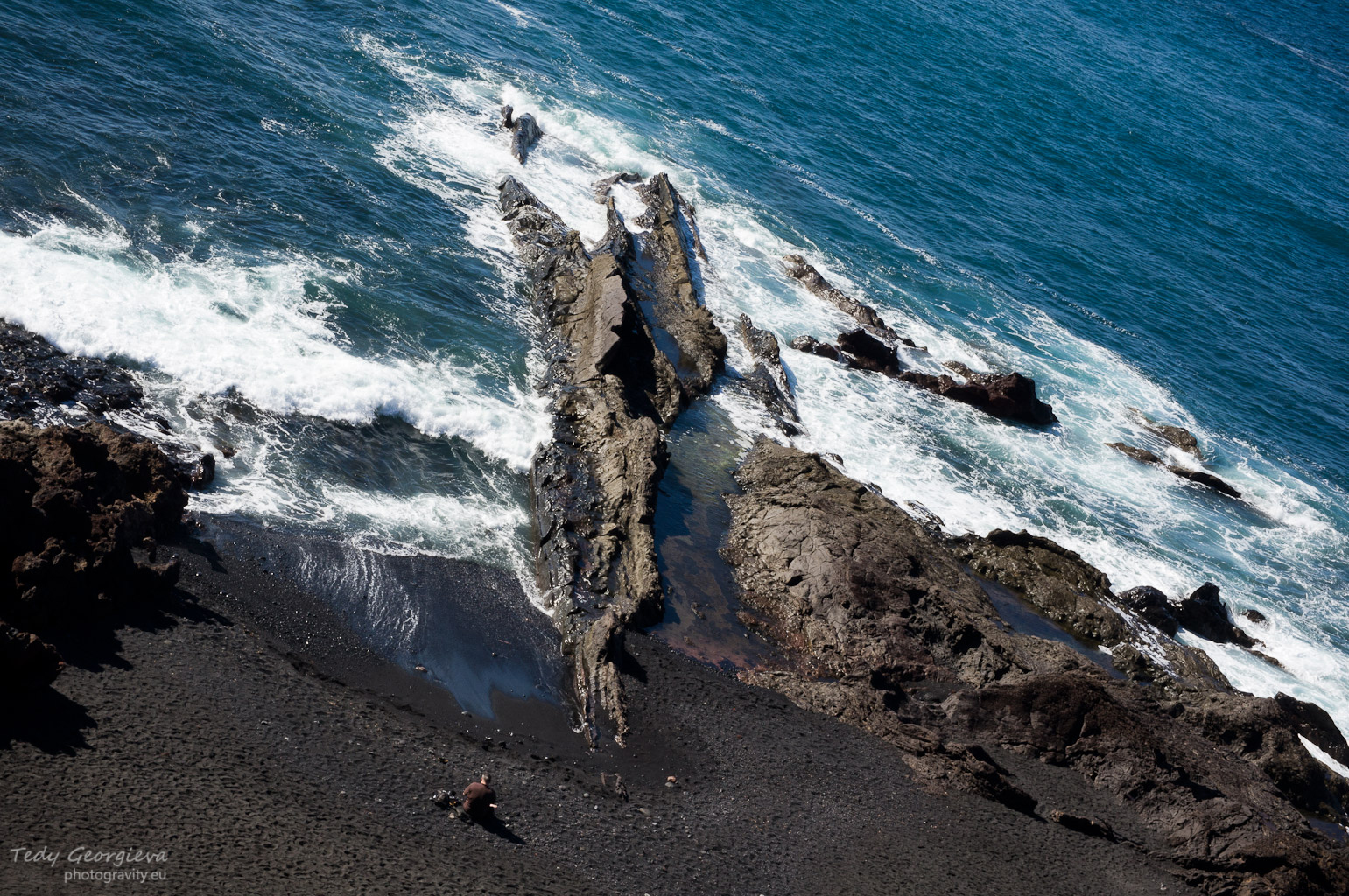 Tony can be contacted at: